In 2009 Rita van Loenen was undergoing dialysis in Phoenix, AZ, three times a week for her kidney ailment. One day, she told the cabbie who drove her to the appointment that she would die unless she received a kidney. The driver, Thomas Chappell,  offered to give her one of his. 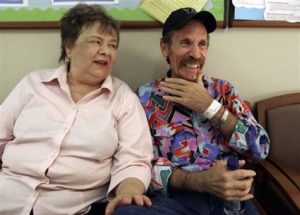 This story is heartwarming, but difficulties arose.  Doctors determined that Rita van Loenen’s body would probably reject Thomas Chappell’s kidney because of differences in their autoimmune systems. So this donation did not take place. Moreover, this frustration is not uncommon.  Incompatibilities of blood type or other characteristics of paired kidneys often prevent transplants. Indeed, in the U. S. today, there are over 100,000 patients in need of a kidney transplant and only about one fifth as many donors. Sometimes, though, couples whose kidneys don’t match can make a kidney exchange with one member of another couple in return for a matching kidney from one of them. This is a good deal because each couple comes away with two healthy, functioning kidneys: one in the recipient and one remaining in the donor.

However unfortunate, the story of Rita van Loenen and Thomas Chappell inspired other generous acts.  When word of Thomas’s offer to Rita aired on CBS News, a certain John Robertson of Portsmouth, NH, decided to donate his kidney. Robertson’s proposal was different from Chappell’s. In contrast to Chapell who named a specified recipient, Robertson’s gift is considered altruistic because it was “without a designated recipient.”  Altruistic donors give to anyone in need and can remain anonymous. In the end, Robertson’s kidney went to a person whose partner donated a kidney to a recipient whose partner donated a kidney until six transplants were performed (Alvin E. Roth, Who Receives What — And Why, 41-42).

As time passed, some hospitals began to prioritize work on kidney donation chains. On October 17, 2017, for example, an altruistic donor named Brian Glennon initiated a chain at Saint Barnabas Hospital in Livingston, NJ, which, by June 14, 2018 permitted 46 transfers.  Beyond the generous act of giving up an organ, altruistic donation multiplies its effects many times over. (TEMPO: The more people help others, the more people help others.)

In Great Britain, chain donations have been going on since 2006.  Ten years later, the National Health Service celebrated their five hundred and first non-directed, living kidney transplant. “In the U. S., about 2 per cent of annual living donations are altruistic.”

It is not only the donors whose generosity makes this progress possible. Due in large part to the work of the economist Alvin E. Roth and the physician Michael A. Rees, collaboration between seemingly unrelated specialties have allowed many more kidney transfers than before.  First, it became possible to delay the implantation of the donated kidney so that the recipient no longer has to be in the same hospital or even the same city as the recipient. Second, improvements in computer algorithms made it easier to match donors’ kidneys to recipients’ needs. These innovations make it possible to move beyond matches between just two pairs of donors and recipients.

Donated organs do not have to come from living persons. Those removed immediately after death can still save the lives of others, but the effectiveness of a transplant from a deceased donor is, on average, only about half that of one from a living person. Since we all have two kidneys and can lead a healthy life with only one, it is far more worthwhile for a living donor to start a chain.

Full disclosure: I have not donated any organ yet, but I am a registered postmortem organ donor. In the U. S., one must explicitly authorize the use of one’s organs after death. In Great Britain, such permission is assumed, although anyone wishing to refuse is permitted to opt out.  For up-to-date information, Google the expression “living donor kidney transplantation” and the names of various agencies able to answer questions will appear. If you can provide other examples of altruism or wish to write an account yourself, please leave a reply in the COMMENT section of this blog.  I also seek information on altruistic living kidney donation in other countries.